UP Notable Book Club:  the Crystal Falls Community District Library in partnership with the U.P. Publishers & Authors Association (UPPAA) has scheduled author events with winners of the UP Notable Book List. The 12th event is with William Sproule whose authoritative history book of the birth of professional hockey in the Copper Country makes a bold claim for its birthplace. The events are open to all U.P. residents free of charge. Read my review of William’s book at The U.P. Book Review.

When: Thursday, December 9th, 2021 at 7pm Eastern / 6pm Central
Where:  on the Zoom platform — please contact Evelyn Gathu in advance by email: egathu@uproc.lib.mi.us, or by phone (906) 875-3344.  We recommend you borrow a copy of these books from your local library or purchase from your local bookseller in advance to get the most out of these events.

BILL SPROULE is a Professor Emeritus, Michigan Technological University, Houghton, MI, where he taught transportation engineering, public transit, airport planning, and hockey history. He is a member of several associations including the Historical Society of Michigan, the Society for International Hockey Research, and the Upper Peninsula of Publishers and Authors. He is a co-author of the airport textbook, “Planning and Design of Airports”, author of several conference proceedings on automated people mover systems, and author of three local books, “Copper Country Streetcars”, “Houghton: the Birthplace of Professional Hockey”, and his newest book, “Michigan Tech Hockey: !00 Years of Memories”. Tonight, Bill is going to talk about his Houghton hockey book but no doubt will tie in the Michigan Tech hockey story. 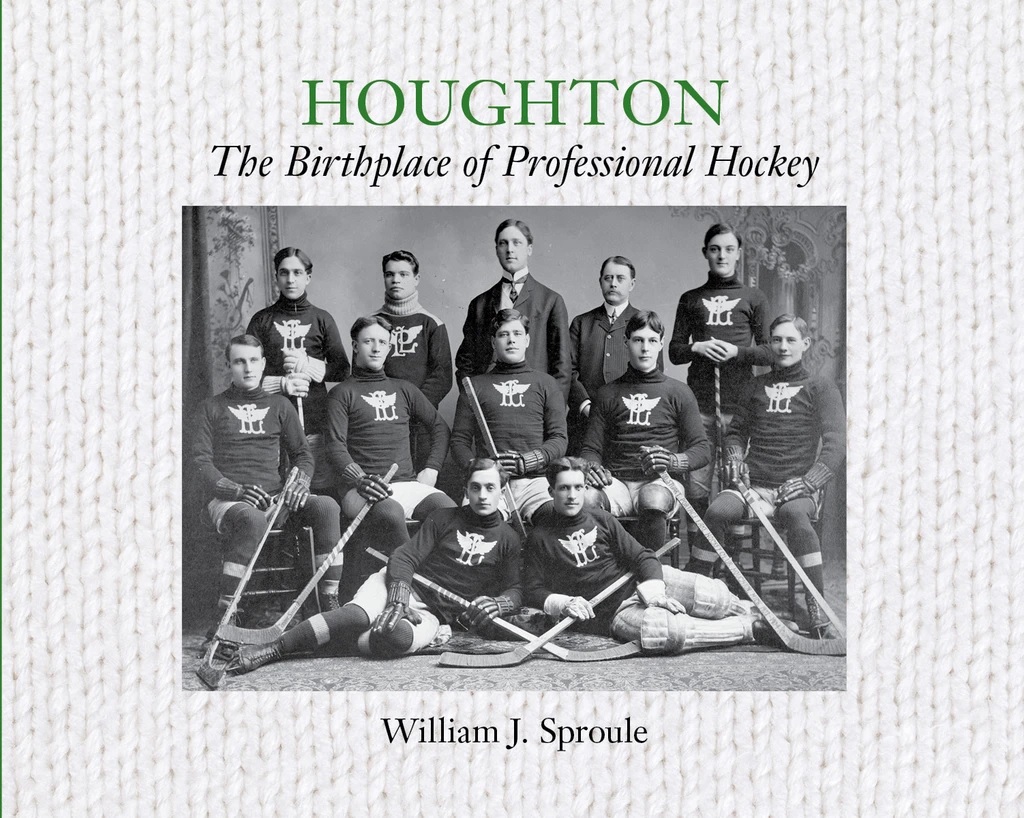 The story of how a Canadian-born dentist and Houghton entrepreneur changed hockey by openly paying players to come to Michigan’s Copper Country to play hockey. In the early days of hockey it was a game for amateurs, however there were rumors that some players were secretly paid. It was not until 1903 that Jack “Doc” Gibson and James R. Dee decided to recruit the best players from Canada and pay them to play for the Portage Lake (Houghton) hockey team. The team won the 1904 U.S. Championship and defeated a team from Montreal for what was billed as the World’s Championship. Following this successful season, Gibson and Dee began promoting the idea of a professional hockey league and in December 1904 play began in the International Hockey League (IHL). The league had five teams – Calumet, Pittsburgh, Portage Lake, Sault Ste. Marie Michigan, and Sault Ste. Marie Ontario, and although the league lasted only three seasons it was the start of professional hockey.

“ If you’ve got a taste for hockey nostalgia, the local history of the Copper Country, or you just enjoy one of Michigan’s most popular winter pastimes, you will enjoy William J. Sproule’s Houghton: The Birthplace of Professional Hockey for the humanity it brings to the players and their cold winter sagas of the early 1900s ‘”  — U.P. Book Review